Deputy FM D. Mardas meets with the Honorary Consul of Kenya, V. Pantazopoulou, and representatives of the Hellenic-Kenyan Chamber of Commerce (Athens, 3 November 2015) 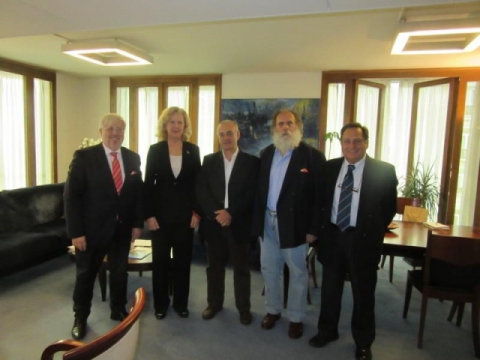 The Deputy Foreign Minister for International Economic Relations, Mr. Dimitris Mardas, met on November 3rd at the Foreign Ministry with representatives of the Hellenic-Kenyan Chamber of Industry, Commerce, Development, Tourism and Culture, and the Honorary Consul of the Republic of Kenya in the Hellenic Republic, Mrs. Vicky Pantazopoulou. Representing the Chamber’s Board of Directors were the Chairman, Mr. Katsikeas G. Venizelos-Vassilis, the Secretary General, Mr. Syngros M. Aristomenis (Aris), and the Member, Mr. Kirimlidis Dimitrios.

During the meeting, there was a discussion of the dynamic of Kenya’s economy, and the two sides stressed the need to strengthen the presence of Greek enterprises in the Kenyan market. Reference was made to sectors of particular interest to Greek businesses, including tourism, construction, energy, agriculture, and, in particular, agricultural equipment, while proposals were discussed for taking relevant initiatives in the coming time.