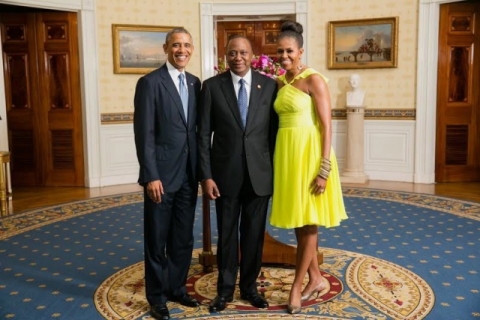 More than $14 billion will be invested in Africa by U.S. firms in sectors including banking, construction and information technology as well as an additional $12 billion in aid to the administration’s electrification program for Africa, President Obama announced Tuesday (5th of August 2014) during the US-Africa Summit (Source: Washington Post).

“The United States is determined to be a partner in Africa’s success, a good partner, an equal partner and a partner for the long term,” President Obama said.

During the summit President Uhuru Kenyatta was welcomed by President Barack Obama and the First Lady Michelle Obama when they hosted African leaders for a dinner at the White House.

President Obama together with First Lady Michelle Obama welcomed President Kenyatta and posed for a photograph with him in the Blue Room inside the White House.

The ministers and the CEOs have been meeting major US companies to work out investment opportunities for US firms as well as to promote Kenyan business in the United States.

"These investments will deepen U.S. economic engagement in Africa, fueling growth that will support broader African prosperity and emerging markets for US businesses, which will support jobs in both the United States and Africa," the White House official said.

Health, Food Security and Wildlife were among the topics that were discussed during the US-Africa Summit.