The Hon. Consul of Kenya, Mrs. Vicky Pantazopoulou, met with members of the Parliamentary Friendship Group for Kenya 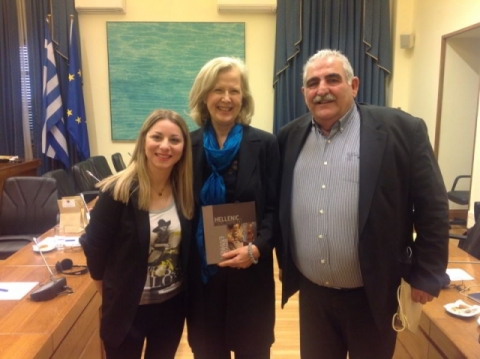 From left to right, the Secretary of P.F.G., Mrs. Panagiota Dritseli, the Hon. Consul of Kenya, Mrs. Vicky Pantazopoulou, and the Chairman of P.F.G, Mr. Nikolaos Papadopoulos.

The Hon. Consul of Kenya, Mrs. Vicky Pantazopoulou, met on March 23rd, 2016, with members of the Greek Parliament, constituting, during this parliamentary period, the Greece-Kenya Parliamentary Friendship Group (P.F.G.). From the parliamentary side, in the meeting participated the Chairman of P.F.G, Mr. Nikolaos Papadopoulos, and the Secretary of the Group, Mrs. Panagiota Dritseli.

During the meeting issues of bilateral interest were raised and ideas for strengthening parliamentary ties between the two countries were discussed. Both parts focused on developing common actions mainly in the fields of education, culture and sports.