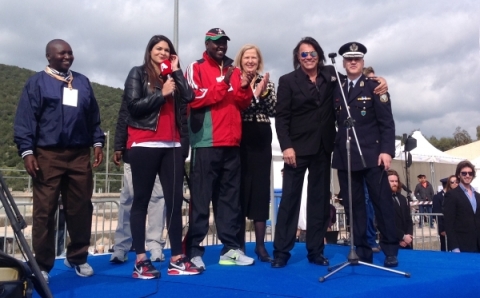 Photo: At the starting point of the Marathon Run just before the Half Marathon of this year starts.

Hon. Jackson Mandago, Governor of the Uasin Gishu County, arrived on April 4, 2015 for an official visit to Greece invited by Mr. Ilias Psinakis, Mayor of Marathon City, to attend the ceremonies and celebrations on the occasion of the Half Marathon Run on April 5th.

The Governor discussed with the Mayor issues on future cooperation and on April 5th both parts signed a declaration of intent stating their agreement to explore and pursue means and ways to forge, improve and strengthen viable ties between the two communities in the fields of athletics, culture, education and tourism.

During his stay in Greece the Governor met Ambassador Mr. Peter Mavroidis, Head of the Directorate General for Political Affairs of the Ministry of Foreign Affairs. Both parts agreed to enhance bilateral relations.