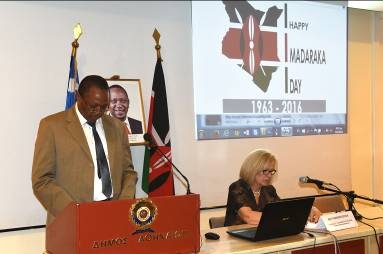 Photo: Mr. Charles Kingori, Chairman of the Administrative Council of the Kenyan Community in Athens, delivering his speech.

The Honorary Consulate of the Republic of Kenya in the Hellenic Republic took the initiative to co-organize together with the Cultural Organization of the Municipality of Athens the first ever in Greece formal celebration of Madaraka Day (commemorates the day, June 1st 1963, that Kenya attained internal self-rule preceding full independence from the U.K on December 1963). The event was also organized in close co-operation with the Community of Kenyans in Athens.

The event took place on Friday June 3rd from 6 p.m.; it was hosted at the Cultural Center of Athens. At the opening the Big Band of the Municipality of Athens performed the national anthems of both Kenya and Greece. 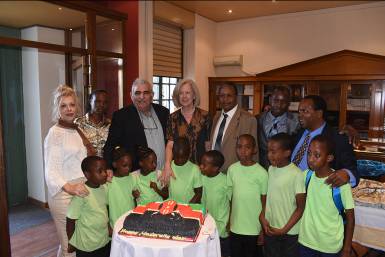 The Hon. Consul, Mrs. Vicky Pantazopoulou, welcomed all attendees and spoke about the meaning this special day has for Kenya. Other speakers were the Vice Chairperson of the Cultural Organization of the Municipality of Athens, Mrs. Helen Zaharopoulou, the Chairman of the Greek-Kenyan Friendship Group of the Greek Parliament, Mr. Nikos Papadopoulos, the Secretary General of the BoD of the Hellenic-Kenyan Chamber of Industry, Trade, Development, Tourism & Culture, Mr. Aris Syngros, the Chairman of the Administrative Council of the Kenyan Community in Athens Mr. Charles Kingori, and the representative of the Head of the Attica Region, Mr. Theodoros Angelopoulos. All speakers focused on the great potentiality that exists to even more enhance multilevel co-operation between the two friend countries.

The audience had the opportunity to watch historical documentaries on Madaraka Day as well as videos on contemporary Kenya aiming to promote Kenya’s culture and tradition to Greece. The singing and dancing of a group of children from the Kenya Community moved all the audience and especially Greeks who are not so familiar with Kenya’s traditions. The Jambo Band of young Kenyans, with their music and rhythm, contributed to the success of the whole event. Finally, all attendees were delighted by tasting Kenyan coffee and tea as well as various Kenyan treats.