Kenya in the 48th Book Festival of Athens 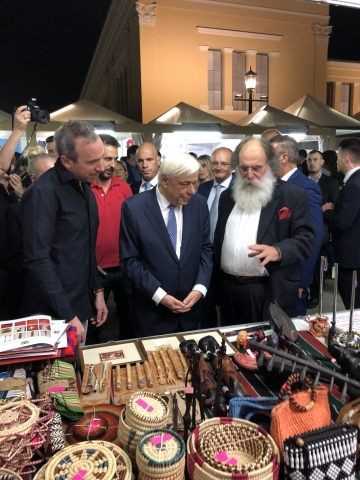 H.E. the President of the Hellenic Republic, Mr. Prokopios Pavlopoulos (centre), being welcomed at the Consulate’s kiosk by the Chairman of the BoD of the Hellenic-Kenyan Chamber of Industry, Trade, Development, Tourism & Culture, Mr. Vassilis Katsikeas (right).

The Honorary Consulate of the Republic of Kenya in the Hellenic Republic participated with its own exhibition kiosk in the 48th Book Festival that took place in Athens from August 30 till September 15, 2019; to participate in the event the Hon. Consulate had the technical support of the Hellenic-Kenyan Chamber of Industry, Trade, Development, Tourism & Culture.

The Book Festival is an institution that has been enriching and upgrading the cultural life in Athens for many decades now – since 1980. It is organized by the Association of Greek Book Publishers in a most renowned exhibition venue of the city, the Zappeion Hall, in collaboration with several cultural organizations as the Hellenic Broadcasting Corporation (TV and radio), the National Theater, private broadcasting media etc. It is carried out under the auspices of the Ministry of Culture and Sports, the Municipality of Athens and the Hellenic Foundation for Culture, with the support of the Directorate of Contemporary Culture of the Directorate-General for Contemporary Culture of the Ministry of Culture and Sports.

As is the tradition, the 48th edition of the Book Festival was officially opened, this year also, by H.E. the President of the Hellenic Republic, Mr. Prokopios Pavlopoulos, on Monday, September 2, in the presence of many representatives of the country’s intellectual and political world.

The Consulate’s kiosk attracted the numerous (over 300,000) visitors of the Festival, both Greeks and foreigners (e.g. tourists in Athens, foreigners residing in Athens), and captured their interest with its many exhibited items as well as with the Kenyan coffee and tea that were offered to them. H.E. the President of the Hellenic Republic was among the enthusiastic visitors of the Kenya kiosk. H.E. was especially interested for the books on Kenya, for the traditional artifacts and, of course, for the Kenyan coffee.

Apart from the kiosk, and on the occasion of the Festival, the Consulate organized other parallel activities too:

Greeks, as coffee-lovers, tasted the Kenyan coffee at the kiosk and were delighted. They all asked where they can buy such coffee in Greece. Kenyan  tea was also highly admired and appreciated.

The traditional handicrafts (as handmade baskets, statuettes made of wood or soapstone, kangas and kikois, beaded ornaments) that were showcased in the kiosk were also much admired by all visitors. Most of them were interested to learn where they can purchase such items in Greece.

One of the main factors that moved without exception all visitors of the kiosk was the Consulate’s announcement that all proceeds from the donations during the 48th Athens Book Festival, as well as from other similar events that are going to follow, will be dedicated to the Consulate’s project of planting trees in a certain location in the County of Uasin Gishu. The County has a worldwide recognition as the homeland of the renowned Kenyan long distance runners and marathoners. The "Forest of Hellas" will be thus created, the forest of the country (Hellas-Greece) where Marathon Race, Olympic Games and Democracy were born. It will be a symbol of peace and friendship in the distant land of Kenya.