The Greek delegation to Kenya 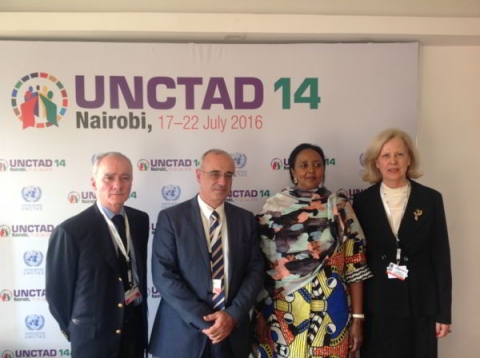 During the meeting Mr. Mardas had with the Cabinet Secretary for Foreign Affairs & International Trade, Ambassador Amina Mohamed, both parts gave emphasis on the excellent climate existing in the relations of the two countries and discussed ways of enhancing them. Amb. Mohamed  accepted Greece’s invitation for an official visit to the country. This event, scheduled to be realized before the end of 2016, will boost the multilevel co-operation of the two friend countries.

During his stay in Nairobi, Mr. Mardas, who was accompanied by Greek business persons, had important meetings with the CS of East African Community, Labour & Social Protection, Mrs. Phyllis Jepkosgei Kandie, the CS of Land, Housing and Urban Development, Prof. Jacob T. Kaimenyi, the PS of Tourism, Mrs. Fatuma Hirsi Mohamed, and the National Vice Chairman and the CEO of Kenya National Chamber of Commerce and Industry, Mr. Laban Rao Onditi and Mr. Μatanda Wabuyele respectively.